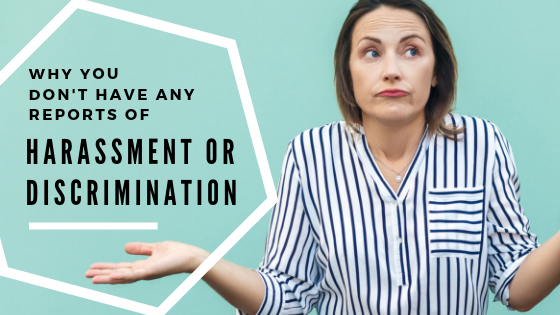 Most employers believe they have a great workplace culture; they work hard to create an environment of inclusion and respect, but how does one really know? When most organizations are asked, “What are you doing to prevent sexual harassment, gender bias, and discrimination in your workplace?” The response is usually a basic policy or quick training that employees go through as a part of their orientation. It’s usually followed up with an additional comment that sounds something like this:

“We don’t have any reports of workplace harassment or discrimination.”

While that statement is probably true, that doesn’t necessarily mean that you don’t have incidents of inappropriate behavior, gender bias, discrimination or sexual harassment in your workplace. In fact, we believe the exact opposite; workplace harassment and discrimination is occurring, it’s just that employees are afraid to speak up or report the incidents when they occur. With that baseline belief, the question becomes, “But why?”

More than anything, our internal systems for handling complaints have to be addressed (in addition to addressing education of the workforce). Our response, and our expectation of how employees and supervisors handle complaints, must become a multi-layered approach that allows your workforce to understand that the behavior won’t be tolerated, but also it will be handled in way that allows employees to feel safe addressing and reporting issues of harassment and discrimination in the workplace (Expect another blog coming soon on this topic); The answer isn’t always termination of the accused.

An absence of complaints doesn’t necessarily mean your organization doesn’t have incidents of workplace harassment and discrimination; it may be a result of your workforce being silenced in making those incidents known to you. That environment can greatly impact your culture of inclusion and respect, as well as effect your ability to grow a diverse workforce.

Want to know if you have incidents of workplace harassment and discrimination that aren’t being reported? Commission a Blindspot Survey from The Center for Leadership Excellence today! Learn more by contacting Jessica Gendron at jgendron@cciindy.com.