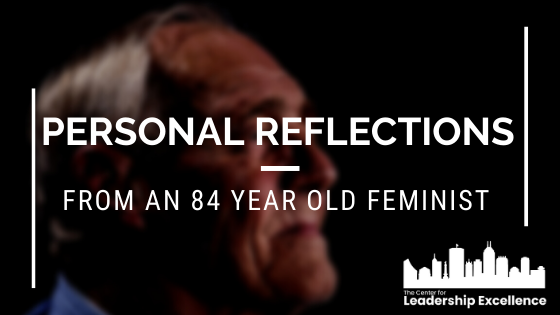 This is Part 2 of a four-part series.  In the first part of this series (blatant discrimination), I discussed historically how men have been promoted instead of well qualified women and how gender biases still plays a role in today’s workplace. Additionally, we highlighted how some male leaders may be oblivious to “promotion blind spots” in their organization and why women feel discriminated against when they are not selected for opportunities with more responsibilities.  You can read part three and part four of this series as well.

Historical Perspective of Hiring Discrimination from 1963:  The next chapter in my feminist education came in 1963 when I started my own Employment Agency. A big focus of our agency was recruiting for sales and entry-level manager training positions. To my amazement, I found myself constantly challenging sales managers who obviously discriminated against hiring female college graduates for sales jobs. I kept asking them, “Why?”:

Their answer always was, “We have always done it that way!”  What is seemingly idiotic now, was actually quite normal back then.  Men predominately held the sales jobs – even for products for women or predominately purchased by women.

One of the first companies to break this discriminatory cycle was Hanes Hosiery. They began to hire women to call on grocery stores and stock their racks with women’s hosiery (products not normally sold by a grocer at that time). These women were paid a reasonable salary and given a panel truck to use for their job.  It was an incredible advancement!

My battle with other sales organizations continued for years.  Eventually, sales managers realized that, if given a chance, many of the women worked harder and out produced their male counterparts. Unfortunately, what they also soon realized they could also pay them less money than their male counterparts, too.  In their eyes, it was a perfect business solution – better productivity and better outcomes, at lower wages.  Genius!  This experience was my earliest education of pay inequity – realizing that women were doing equal or better work than men, but getting paid exponentially less.  Women have not only faced hiring discrimination, but even when hired they’ve then faced pay inequity for as long as I can remember.

When I First Learned I Was A Feminist

In 1964, a woman in our office invited me to a Women in Business (WIB) luncheon. She told me I was getting an award for my efforts to get women hired in jobs traditionally held by men. I wasn’t aware of the WIB organization, let alone the award. I was just doing what I believed was right – and what made good business sense – I wasn’t looking for a trophy or even recognition.  There, I learned even more about the hiring discrimination women faced during that time.  I was honored to be recognized as a Male Feminist or what we now call a “male ally”, yet I still did not fully understand the significance and importance of the feminist movement.

It may have taken 60-years, but we can celebrate a lot of success as a result of the feminist movement(s) and their impact on more non-discriminatory hiring.

“Hiring Blind Spots”: Most senior managers report their organizations are a great place to work but when it comes to hiring women, it is my experience that they have some “Hiring Blind Spots” of which they are not aware. They can’t fix a problem they do not know exists. The following are a few examples.

Immediate Solutions: 60 years ago, I “pushed” sales managers to hire women. Today I am still championing gender balance initiatives, except my efforts are now directed at executives. If we are going to achieve gender balance goals quickly:

What do we do about it? How do we make progress towards gender equity faster? I am certain, if you are reading this article, that you care about the topic. In retrospect, we have made a lot of progress overcoming discriminatory hiring practices but much more needs to be done.  A first steps of the solution is to budget a survey to determine if “gender blind spots” in your organization that are occurring unnoticed by top management’s. It’s critical that you KNOW if these issues are occurring in your organization without your awareness or knowledge. The best one I have seen has been developed by Jessica Gendron and her team at The Center for Leadership Excellence.  Visit their web site www.cleindy.com

Next Topic: In the Part Three part of this blog series, I will discuss Why Women Don’t Have Workplace Equality.

Bio: Richard Butz is founder of The Center For Leadership Excellence whose mission is “Making Indy A Great Place For Women To Work” He has been recognized as a pioneer and a passionate advocate for gender balance and gender equity in business for over four decades.