If Only Leaders Were Provided Regular and Honest Feedback: A Case for Coaching. 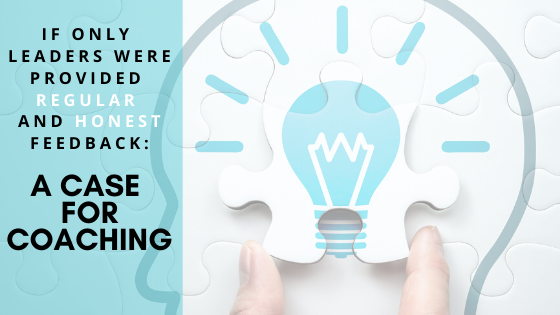 If Only Leaders Were Provided Regular and Honest Feedback: A Case for Coaching.

I often get called in as a last resort to rescue (coach) an Executive or Senior Leader who is too valuable for the organization to lose; the issues created by their leadership or communication style can no longer be tolerated by the organization. Regardless of why I am called in, when I have my first meeting with the leader, I typically discover that they’ve rarely been given feedback on their leadership and communication. If they have, they have been given no guidance or support on how to fix the problem. Most of the time, the leader really wants to improve, but is typically unaware of how they were negatively impacting the organization.

I don’t know why company leadership is so willing to tolerate bad behavior, until it gets to the breaking point, when providing regular feedback and some coaching could dramatically improve the problem. I do know, that when feedback is given and a coach is engaged to help, an individual can make meaningful and rapid improvements.

Consider the case of Steven.  Steven had a very successful career as a radiologist, until he didn’t.  He had been practicing for 8 years and had never had a complaint, until he found himself practicing with a group who was responsible for reading mammograms in a hospital setting, and often, delivering unpleasant news to female patients.  Quickly, patients began to complain about Steven’s “bedside manner”; They reported he was gruff, insensitive, blunt, and intimidating.

No one in the group addressed the behavior and the circumstances escalated to the point it was reported to the hospital’s medical review board.  Instead of suspending him, pending an investigation, the hospital decided to try a different approach.  Taking advice from their attorney, they engaged a coach to help address his behavior and improve his interactions with patients.

Steven was a big man with a very direct communications style, yet he had never received feedback that his communication was problematic.  He never intended to create a negative experience for his patients and was determined to fix the problem. Working with him, his coach was able to provide feedback that helped him understand the messages he was delivering were being perceived by patients and how he could modify his communication to achieve a more positive result.  Immediately he applied these actions into practice and his outcomes were dramatic.

Steven was very grateful for the opportunity to work with a coach that could raise his awareness and show alternative approaches in his communication. He believed it saved his career and created much more positive experiences for patients.

Leaders and high level executives often live in a “feedback bubble”.  They’re rarely given feedback about how they can improve because there are few people who are empowered to provide feedback or speak up when there is a problem with the “boss”.  It is important to the constant development and improvement of leaders to have someone who gives feedback and is empowered to do so; Sometimes the best person for that is a coach.  Providing direct and honest feedback on an on-going basis can help you better manage these and other leadership behavior issues from escalating to a breaking point.

If you find yourself in need of the help of a third party to help intervene, provide support, or coaching, please give us call.  The Center for Leadership Excellence is the premiere Early Intervention Coaching Firm with a 95% success rate in improved behavior and employee retention.  Let us help you turn the situation into a win-win for everyone.

Is Now the Right Time to Invest in Your Leadership Development as a Female Leader?

The Five Myths of Work-Life Balance