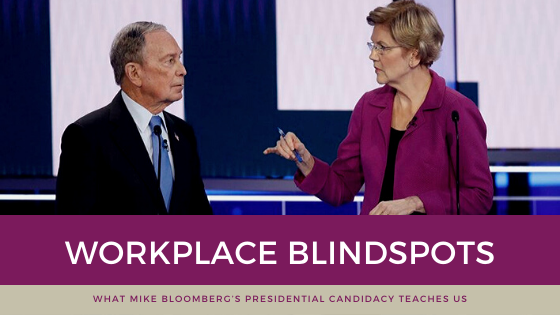 What Mike Bloomberg’s Presidential Candidacy Teaches Us About Workplace Blindspots.

Last week was Michael Bloomberg’s first time on the democratic debate stage and by all accounts, the other presidential candidates came out swinging at him like a boxer from the corner of the ring. At one distinct point, Elizabeth Warren confronted Bloomberg’s alleged mistreatment of women and focused in on nondisclosure agreements signed by women who sued Bloomberg. Warren then demanded that he release those women from those agreements and allow their allegations of harassment or discrimination to become public.

When Bloomberg was asked to address the accusations, he responded by touting the number of women in leadership positions within his foundation and business, noting, “I have no tolerance for the kind of behavior that the #MeToo movement has exposed.”

And there was the moment.

Most critics called this moment the demise of his campaign and congratulated Warren for not backing down, even when he tried to explain it away. I saw a different moment. I saw a moment that likely represents the experiences of so many organizations today.

If you don’t know much about Michael Bloomberg or his company Bloomberg, you might not know how his organization is focused on, not only diversity and inclusion (learn more), but the advancement of women. Take a second and check it out here. We’ll wait here until you come back.

Bloomberg (the company) talks openly about diversity and inclusion – and particularly creates space for the company’s focus on gender equity. You’ll even find a quote from Bloomberg (the man) on the company’s website stating, “We are dedicated to empowering the women working at Bloomberg across every level and every function. Through our professional development programs, industry-leading initiatives and inclusive policies and benefits, we are advancing gender equality both at Bloomberg and beyond.”

It is reasonable assume that Mike Bloomberg takes great pride in his company openly embracing these causes and creating a culture that is a great place for women to work.

Yet there Michael Bloomberg was, on the national debate stage – and on national television, being called to the carpet for something he probably didn’t even realize impacts the culture for women in the workplace. That juxtaposition of conflicting messages seems obvious to the women who’ve fallen victim to a company’s incongruence. Yet, for many business leaders, they may be blind to some of the cultural and systemic issues that impact a woman’s experience, while simultaneously touting their organization as a best place to work. Michael Bloomberg, like many male business leaders today, are often well intentioned, yet typically blind to the realities that women face in the workplace.

That’s not acceptable anymore (to take a cue from Elizabeth Warren).

It’s not acceptable to play the “I didn’t know” card anymore. Organizations shouldn’t tolerate the incongruence between the aspirations of their culture and the realities of their workplace.

Michael Bloomberg’s exchange with Elizabeth Warren during the democratic debate should be a siren call to all of us. It’s a call to pay better attention to the blindspots that might exist in the culture and systems of our organizations. It’s a reminder to continually explore where our organizational blindspots are and work to address the systemic and cultural issues that exist that impact employee experience. It’s a lesson to all of us – you can say you’re a great place for women to work, but that requires you to be a great place for women to work, too.